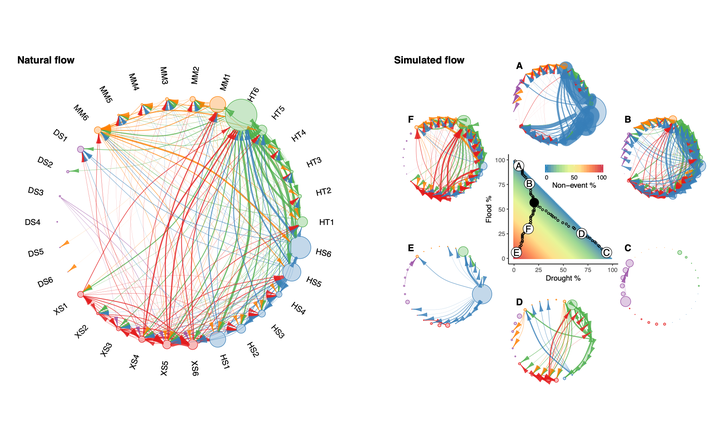 Riverine ecosystems are governed by patterns of temporal variation in river flows. This dynamism will change due to climate change and the near-ubiquitous human control of river flows globally, which may have severe effects on species distributions and interactions. We employed a combination of population modelling and network theory to explore the consequences of possible flow regime futures on riparian plant communities, including scenarios of increased drought, flooding and flow homogenization (removal of flow variability). We found that even slight modifications to the historic natural flow regime had significant consequences for the structure of riparian plant networks. Networks of emergent interactions between plant guilds were most connected at the natural flow regime and became simplified with increasing flow alteration. The most influential component of flow alteration was flood reduction, with drought and flow homogenization both having greater simplifying community-wide consequences than increased flooding. These findings suggest that maintaining floods under future climates will be needed to overcome the negative long-term consequences of flow modification on riverine ecosystems.